Kuroko Tetsuya doesn't stand out much. In fact, he's so plain that most people never even notice he's around. Though he's pretty much the same on the basketball court, that's where this unobtrusiveness gives him an unexpected edge: one that lets him execute awesome moves without his opponents noticing! Once dubbed "The Phantom Sixth Man" of a legendary middle school team known as the Generation of Miracles, Kuroko enters Seirin High School, a brand new private school with a nascent basketball club, with only one goal in mind: to defeat the members of his old team and prove that "Kuroko's Way" is superior to the Generation of Miracles'. 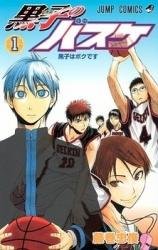