The Calamity War that engulfed all of Earth, and the Gundams deployed then which were said to have brought it to an end. 300 years later, some have been hidden, some abandoned. Argie Mirage, a boy who carries the past of his family’s death at the hands of a Gundam, meets Volco Warren, a boy who wishes to rebuild the Gundam his family left behind. To destroy a Gundam. To rebuild a Gundam. In the midst of the two boys’ intersecting fates, the Astaroth will awaken from its 300 year slumber 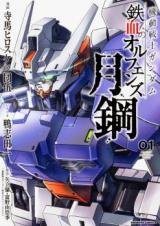