One night, senior high school second-year Nishina Airi is abducted. When she wakes, she is trapped in an uncanny, isolated space with other students from her high school and forced to take part in the “Werewolf Game.” Thus, a death game filled with fear and terror that would pit “Werewolves” and “Villagers” against each other, force them to murder—a game with rules so absolute, defiance is punished by gruesome death—begins. 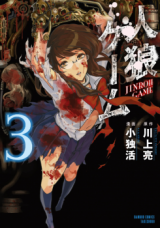