To cure his persistent virginity, Yuuto Mutsura joins his friend Naota in a trip to Aqua Eden, the "City-by-the-Sea", where brothels are allowed. Before he has a chance to become man, he is separated from his friend and accidentally turned into a vampire! Now forbidden to leave the city and forced to participate in a Public Morals task force with several beauties, how will Yuuto handle this new life? 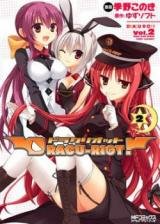